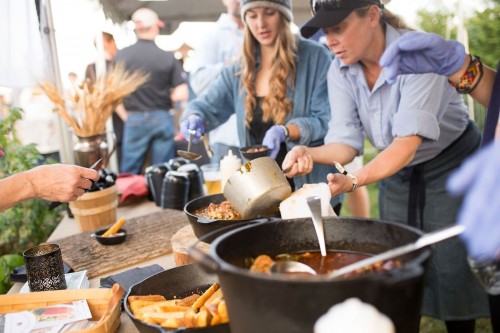 Shelley Cooper, Executive Chef of the Appalachian Bistro, is featured in an article titled “Grains & Grtis Festival Plans to Elevate Culinary Experience” for Chattanooga Magazine. Here is an excerpt from the Oct. 2018 article by the festival’s new additions, and culinary elevation:

“The chefs participating in this year’s festival are passionate about the whiskey, our region and the culture and their cuisine will be representative of this,” said Cooper. “Whiskey is great for drinking, but the chefs will show how whiskey has broader applications and can also be used for cooking.”

Executive Chef Shelley Cooper, a participant in the Grains & Grits Festival since its inception, is leading this year’s culinary component of the event. She finds that showcasing the ability of chefs in the region provides a new perspective.

Shelley Cooper, Executive Chef & Head of Culinary Operations Shelley was born in Memphis, TN, into a family that revolved around a bountiful table always filled with farm fresh Southern cuisine.  Her maternal family hails from the Mississippi Delta, and her father from the Blue Ridge Mountains of North Carolina.  She credits this combination with providing her Southern culinary roots. Both families placed a high regard for fresh, seasonal, and ‘made from scratch’ foods, as well as instilling the appreciation of pure simple ingredients.  Shelley could not help but to be positively affected by such inherent passion.  She was professionally trained at Johnson and Wales Culinary Institute in Charleston, South Carolina and The San Francisco Baking Institute.  Chef Shelley honed her craft at Belfair Club in Hilton Head, South Carolina, 30 Blue at Bay Point Resort in Florida, Craggy range Winery in Hawkes Bay, New Zealand, First and Hope Supper Club in Los Angeles, Alaska Expedition on the Gulf of Alaska, Monettes Artisan Seafood on the big island of Hawaii, and TerraMae Appalachian Bistro in Chattanooga, Tn.  Now she is tapping into her roots and fully embracing her heritage at Dancing Bear Appalachian Bistro in Townsend, TN.  The culmination of her life travels and culinary passion have merged to create her unique version of highbrow Appalachian Fare.