The Smokehouse: An Appalachian Tradition 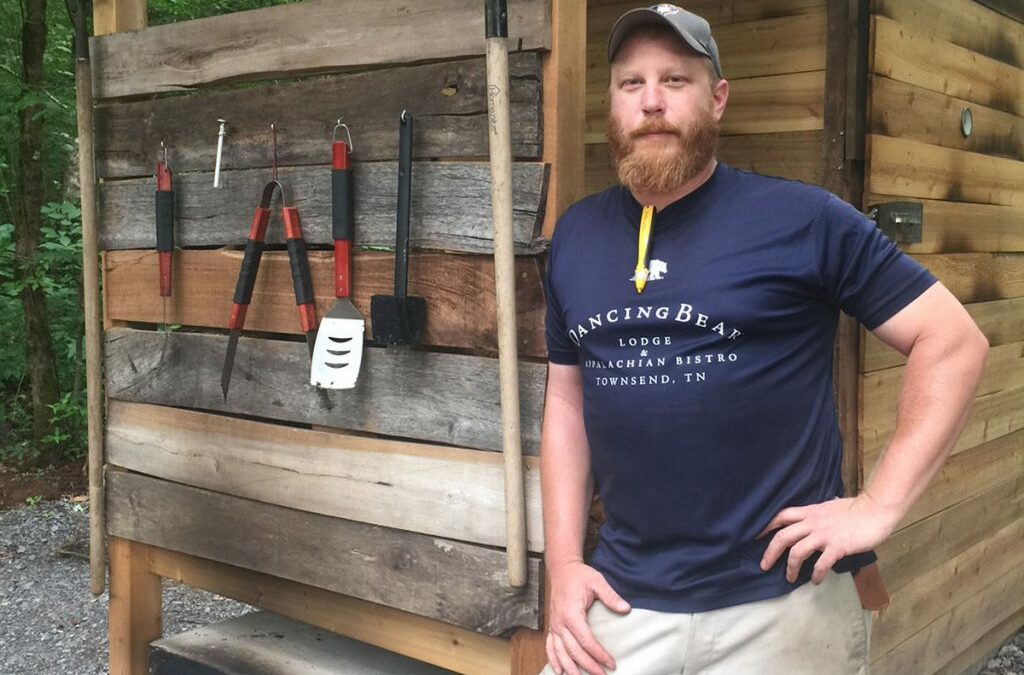 We’ve added an old-fashioned Smokehouse to add a delicious smoky flavor to dishes on the menu like Chef Shelley’s pork osso bucco, whole duck, salmon, and pork shoulder. You’ve gotta have dinner at Dancing Bear Appalachian Bistro just to taste it for yourself!

It took Jean-Paul Borrouso about 10 days to build the Smokehouse for us out of a combination of cinder blocks and black walnut recycled from when we added the new villas last year, along with cedar shingles from Anderson Lumber of Maryville, steel cooking grates made locally by Keith Shepherd, and concrete, rebar, hardware, and trimming we got from Ace Hardware here in Townsend. In fact, he used oaks, hickory trees, cherry, and cedar all sourced from here on the property.

Jean-Paul told us that when he was a youngster in southeastern Louisiana, old smokehouses like this one were used to season and cure andouille, game, and seafood. Meats with a higher fat content will always absorb the smoke flavor far better than lean cuts, he said.

We aren’t exaggerating when we tell ya this food is mouth-watering de-lic-ious! If you were looking for a definitive “flavor of the south”, a good choice might be smoked meats like these that were so important in old Appalachia. Thank goodness the traditions thrive today instead of being locked up in a museum.

Here at Dancing Bear Appalachian Bistro, we don’t just pay lip service when we talk about following regional traditions and celebrating the Southern heritage of this area. Come taste the proof for yourself!

How does Smoking Meat work?

Why do we go to this much time and effort when our kitchen offers every modern tool and gadget a restaurant could ask for? We could try to explain with a bunch of fancy words, but it’s simpler to taste a bite and fall in love.

Smoking meat has been used for generations, often with hickory wood for the best flavor possible. The meat is typically exposed to smoke from burning wood, which adds flavor and preserves the food. The smoke goes through a long pipe, then cools down to reach the meat at between 85- and 125-degrees Fahrenheit.

Smokehouses traditionally served as both cooking and storage in detached buildings apart from other structures (because they really didn’t have fire hydrants on every corner back then, and you didn’t want to burn the whole village down just to make dinner for all of your kinfolks).

Absent modern conveniences like refrigeration, folks back in the olden days preserved meats and fish with salt curing and extended smoking over several days to make it last through the harsh winter months (there weren’t any supermarkets back then, either).

Hams and bacon were the primary cuts of pork you’d find hanging in these smokehouses. Some cheeses, vegetables, and ingredients used to make beer or tea have also historically been smoked.

The Old Smokehouse Was Part of the Original ‘Farm to Table’

In old Appalachia, long before these lands filled with suburbs and shopping centers to serve them, people ate what they grew in their own gardens and made sausage from the hogs on the family farm.

“Most folks had hogs, so pork was abundant,” explained Elaine Irwin Meyer, President of the Museum of Appalachia in Clinton, Tenn. “We would can our sausage, hang our hams in the smokehouse to cure and use the fat to season our vegetables. It has been said that the only part of the hog that was not used was the squeal!”

Back then, a major ingredient in the foods people ate was love. And patience.

“When I think of Appalachian food, I think of long-simmering pots of food lovingly prepared by women who enjoyed creating a wholesome meal for those they loved,” Meyer said. “There was nothing quick about this kind of food preparation, and maybe that aroma created an anticipation that made the meal even more appealing. Mealtime was a time of sharing and listening and just being together time for busy families.”

The practice of smoking meats seems so removed from today’s quest for instant gratification, most often expressed in culinary terms by the microwave, the frozen TV dinner, or the fast food joint around the corner. Nope. Smoked foods required planning ahead and taking care of everybody from the wee ones running around to the aging elders.

A major benefit of smoked meat: it can last up to a year when kept in a cool, dry place. Of course, the demand for Chef Shelley’s dishes calls for consumption well before then, but a little knowledge is a nice accent to go with your meal.

Today, smokehouse creation is more commonly popular among those who believe in self-sufficiency and preserving how we did things before we relied so much on electricity and other people. It is wise to keep traditions alive, plus once you taste smoked foods, you begin to understand why it’d be nice to have it readily available. Chef Shelley’s smoked meats are special treats for delicious meals, but we figure some folks might want to build their own smokehouse after getting a taste.

“The purpose of a smokehouse is to enclose heat and smoke, and reduce, but not entirely eliminate, airflow,” reads Countryfarm-lifestyles.com.

Smokehouses, they say, still need to be built away from combustible materials and follow local ordinances and fire codes. Just bear that in mind because even in the 21st century, burning down the village is still something to avoid if you can prevent it.

If you want to make your own smokehouse, we recommend you recruit Jean Paul Borrouso to help out. Tell him we sent ya. Meanwhile, come to Dancing Bear Appalachian Bistro and you’ll understand why we put the time and effort into building a smokehouse here on the property.