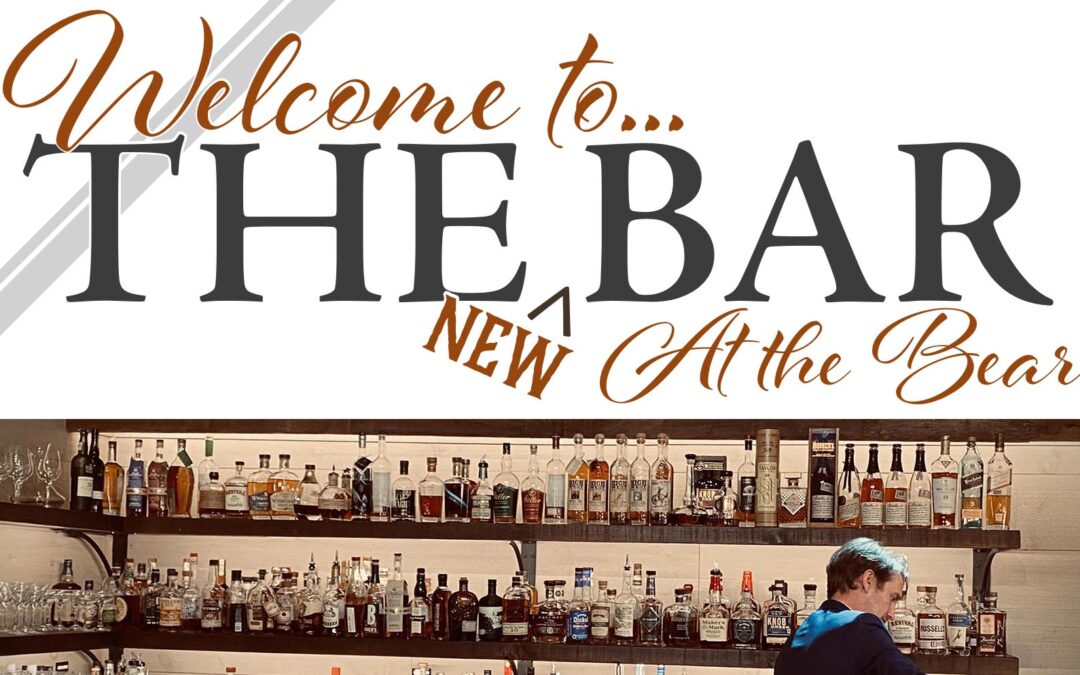 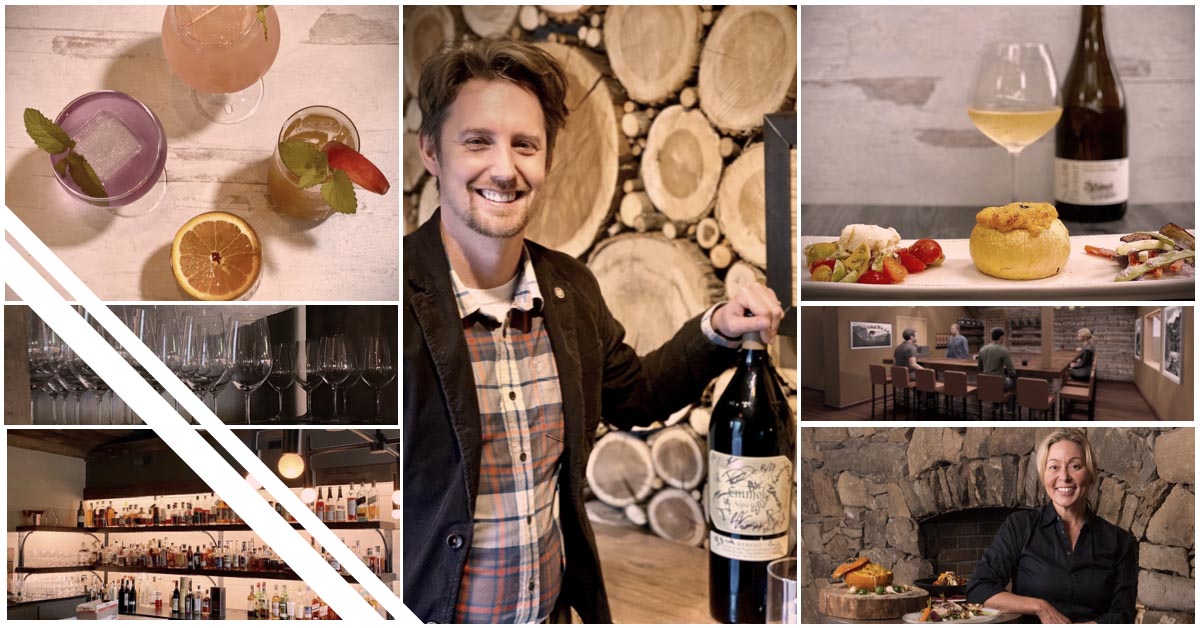 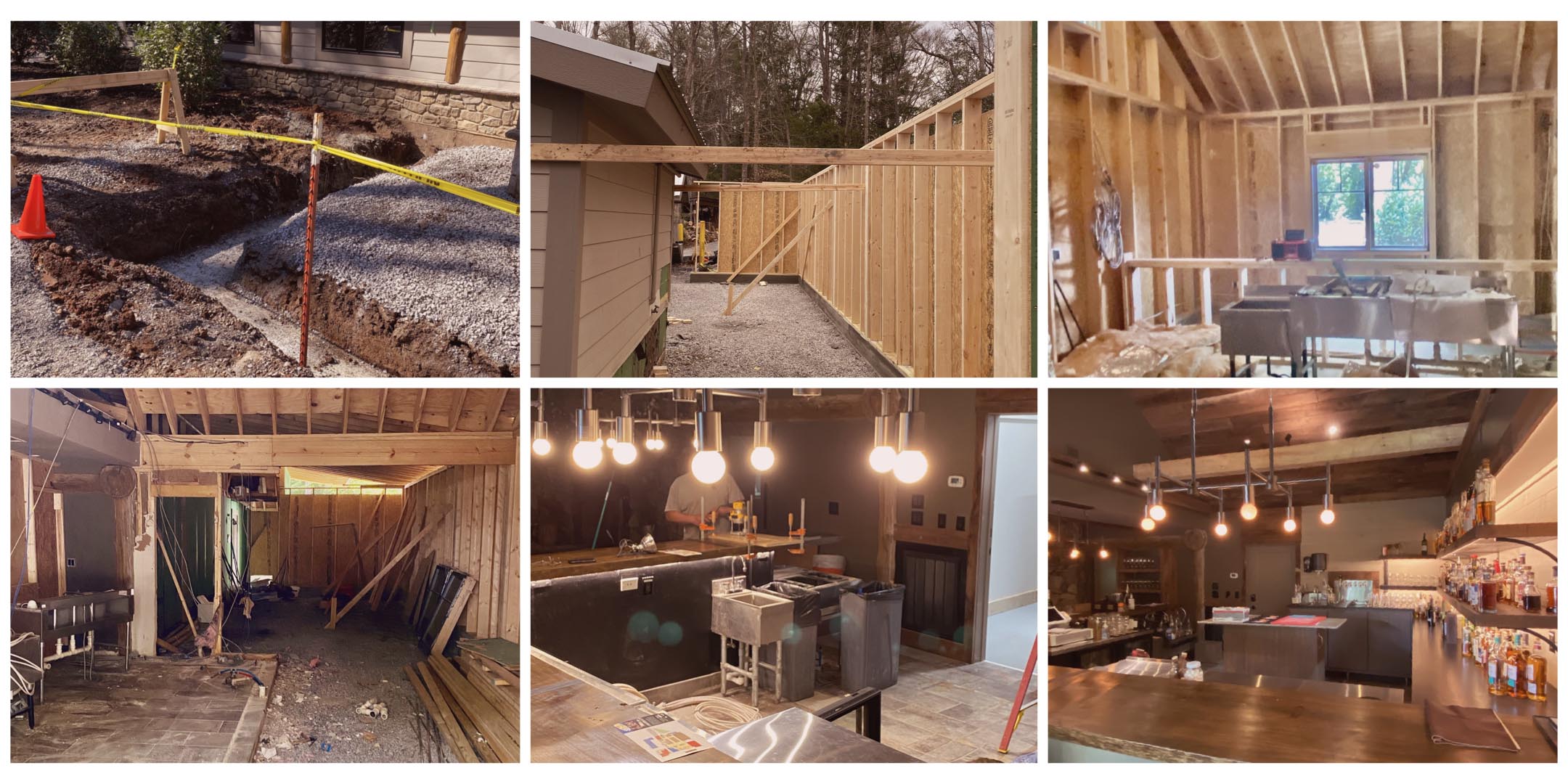 Here’s what we are so excited about!

Big changes have been taking place at Dancing Bear Lodge!

Executive Chef Shelley needed a bit more culinary space for her and her team to keep creating signature Appalachian cuisine, and our bar – although cozy, lacked the functionality required to keep expanding our wine selections and the elbow room needed to continue crafting those delicious craft cocktails! So in early January 2020, Dancing Bear Lodge & Appalachian Bistro broke ground on an

The Designer and co-owner Sharon Oldham along with the Architect, Andy Morton, set in to action expanding the bar, kitchen prep and cold storage areas.
Though Covid-19 slowed initial progress – construction resumed in early June and we are happy to announce the expansion completion on August 15th, 2020!

The newly expanded bar boasts the same beautiful and rustic design and decor featuring our signature black walnut throughout like its predecessor, but with so much more space, seating, bar shelving, storage and even a temperature controlled 300+ bottle wine storage room and walk in cooler.

We can’t wait to have you visit, try a craft cocktail, enjoy our new bar space and while you’re here, take a moment to talk with our Sommelier about the perfect wine to pair with your meal!

Wait…who is our Sommelier?
Let us introduce you! 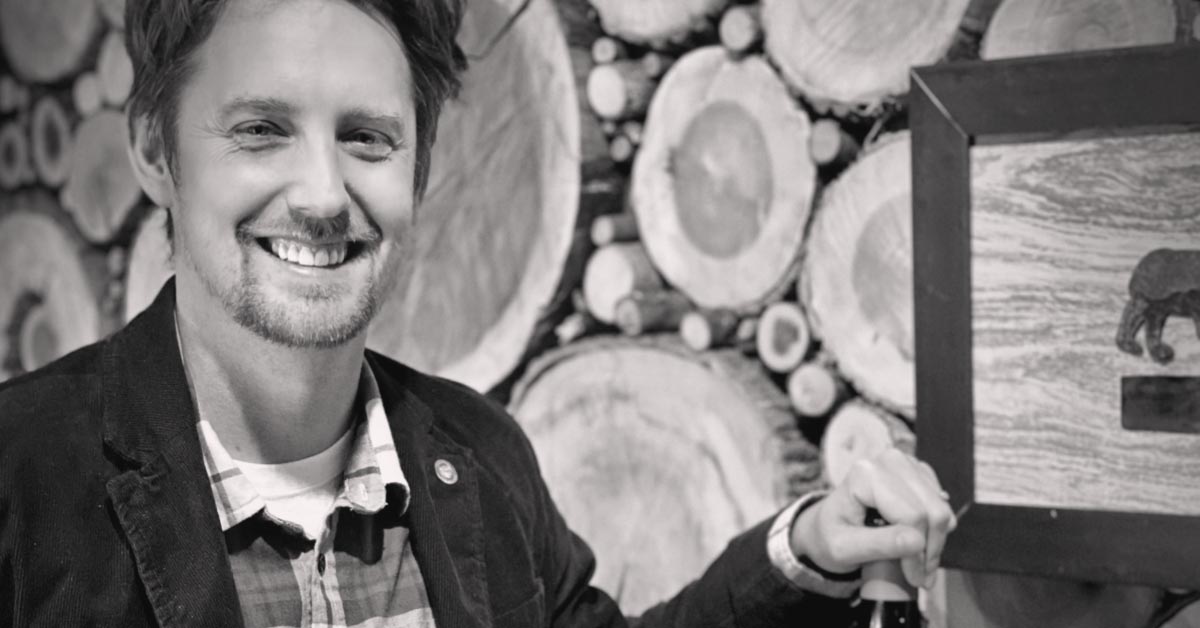 We would like to take a minute to introduce you to our new friend, Certified Sommelier, and Appalachian Bistro General Manager, Matt Burk.

We sat down for an interview and wanted to share Matt’s really cool background story, surprising career shift, and evolving vision for the newly expanded Bar at the Bear!

Q: Tell us a little about yourself Matt. Where are you from, and when did you realize that being a sommelier was something that interested you?

A: I grew up in a small coastal town in Southern Maine (Wells). It was a tourist town, so naturally most of my summer jobs were in restaurants. My first was as a dishwasher in one of my friend’s parent’s Italian restaurant, The Impastable Dream. The summer between High School and college, I took a job as a server assistant at a highly acclaimed restaurant, Arrows, run by James Beard Award-Winning Chef’s Clark Frasier and Mark Gaier. I had no idea what I was stepping in to, but I quickly became fascinated with fine cuisine (lots of culinary firsts there: Caviar, Fois Gras, Duck, haute cuisine in general). Beyond tasting food I’d never dreamed of before, every day during our pre shift meeting, the chefs and wine director would talk about wine: new wines we just got in, what wines to pair with new dishes, etc. The talk intrigued me, and despite my age, the servers would occasionally sneak me tastes of wine. I still remember my first taste of fine wine: Kistler Chardonnay. Even though I was going off to college to become a marine engineer, I still had this newfound love of wine. My mother even started asking me what wine to get at the store (even though I wasn’t old enough to drink it yet!) Throughout college, I went back into restaurants during the summers, even connecting with Chefs Mark & Clark again with a new concept they had, MC Perkin’s Cove, this time as a server, with what I had thought would be my last restaurant job.
Fast forward 4 years, I had moved to Houston, Texas, working as a naval architect in the offshore oil industry, but was not exactly enjoying what I was doing. I decided I needed to make a change. I started looking back to my fond days in restaurants, and decided to go back into that world. From there, I constantly sought employment at restaurants with great wine lists, learning all I could.

Q: Tell us a little bit about how you became part of the Dancing Bear Family and your Journey along the way…

A: Sure. I moved to Tennessee in 2013, and took a job at a recently-opened wine shop, Corks Wine & Spririts. The owner, Ryan, (a Certified Sommelier himself) took me under his wing, and gave me the guidance to pass my Certified Sommelier exam on my first try. While I was at Corks, I met Thomas Boyd, who was planning to open a Wine Bar in the Old City, in Knoxville. I left Corks to help open Old City Wine Bar in 2016, as their Sommelier and Bar Manager. Just over a year later, I became GM of OCWB, and was soon working on expanding the concept to include an adjacent farm-to-table restaurant, Rebel Kitchen. Shortly after launching Rebel Kitchen, I was asked to run the beverage programs of two recently acquired bars/restaurants, Barleys & Merchants of Beer (along with Rebel Kitchen/Old City Wine Bar). While we were certainly able to accomplish our goal of elevating the wine drinking in the area, we were unable to crack the elusive code to sustained success, and closed RK/OCWB in February 2020. Along the way, I had become tightly engrained in the restaurant scene in East Tennessee, forming wine tasting groups with other sommeliers and aspirings throughout the area (including a couple of DBAB alums). It was one of these connections, one of my sales reps, who had worked with Chef Shelley in Chattanooga, who had heard that DBAB was in need of a GM with wine knowledge, and she thought that Chef and I would be great collaborators. I took over as GM of DBAB on February 29 of this year, precisely 1 day after closing Old City Wine Bar. I can’t say that the past 6 months have gone the way I had expected or planned (understatement of the century), but I am excited to be here, and looking forward to what the future holds for me on “The Peaceful Side of the Smokies”.

Q: What is a certified Sommelier and what does that entail to earn that title?

The technical answer to the question is that a sommelier, in restaurant parlance, is the individual who assists with the selection of, and then serves the wine in a classic service brigade. It’s a position within the restaurant, same as bartender, server, host, etc. Nowadays, many restaurants do not employ a sommelier as their sole role in a restaurant. As sommeliers are often more experienced restaurant professionals, many modern restaurants merge this classic role with other related responsibilities, such as Lead Server/Bartender, Bar Manager, or, as in my case, GM.
The modern sommelier a cheerleader to the world of wine, guiding guests to experiences in wine, in an approachable, unprententious manner.

A Certified Sommelier is an individual who has successfully passed the second level of testing by the Court of Master Sommeliers. The exam consists of 3 parts: written theory, deductive tasting (aka blind tasting), and service. The theory exam covers all aspects of the world of wine (and beyond), ranging from climate and soil of a given region, to specific production methods, to taste profiles of famous/classic wine producing areas. The blind tasting is kind of as the name would imply. Candidates are tasked with accurately describing unidentified wines, and using those descriptions, combined with one’s theoretical knowledge to correctly deduce/identify the grape, place of origin, and age of the wine. The final part of the exam is the mock service portion, where you serve wine to a Master Sommelier, being judged on proper ediquette, while being peppered with questions about wine recommendations/pairings, classic cocktails and more. (easily the most nerve wracking part of the whole day)

Q: What vision do you have for the Bar at DBAB and what do you hope to see people enjoying from the bar soon?

A: First of all, I’m excited to introduce our guests to some of my favorite wines I’ve discovered over the years. (follow us on social media for our new weekly “Sommelier Spotlight”, where I will showcase some of my new additions).
As for the new bar, I’m of course excited for the added, beautiful space. But I am also excited about what that extra space is going to allow my bar team to create. While I dabble in mixology, wine is my forte, so I’m letting the rest of my leadership team take the reins on our craft cocktail selection Bar Manager Alejandra, Service Manager Tanner, and Private Dining Manager Nicole, all have extensive bartending experience at both DBAB and beyond (and can still be found behind the bar more nights than not). We’ve already grown our cocktail menu to six signature drinks, with plans to build that out to twelve (some classics with a DBAB twist, some altogether new concoctions!) Great things are certainly on the horizon for the bar – and i’m truly excited to be part of this team and journey forward!

Thank you Matt for letting us inside your world for a little while. We are so excited to have you as a valued edition to the Dancing Bear Family!

Stop by, enjoy a drink at the new bar and introduce yourself to Matt and the rest of our team - we can’t wait to share these big changes with each and every one of our Friends of The Bear!