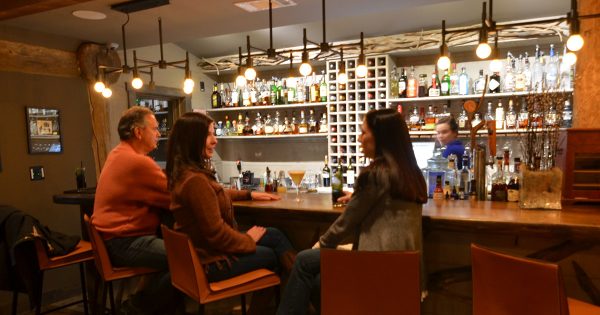 The next time you join us for dinner at Dancing Bear Appalachian Bistro or drinks at Townsend’s only full bar, Bar at the Bear, consider asking your bartender to sample one of the delicious beverages brewed and bottled by our friends at the East Tennessee Brewery for Blackberry Farm, eight miles away from us in Walland TN.

BeerAdvocate described the Blackberry Farm Belgium Abby Quad (10% ABV) as, “a dark and robust Belgian Abbey style Quadrupel with notes of dark fruit, reminiscent of cherries or strawberries, and a rich maltiness.”

Ratebeer notes that the Blackberry Farm Brett 18 Sasion (7.5% ABV) is, “Farmhouse Ale fermented with brettanomyces and aged in red wine barrels for 18 months. Unlike the regular 2017 Brett Saison, this is 100% aged beer instead of a blend of fresh and aged, and 18 months instead of 12.” Users of the site rated it 3.56 out of 5.

The Tennessee Cream Ale is brewed with flaked corn and heirloom grits and fermented with a wild strain of native yeast, according to the brewery. This process is done for a delicately malty body with a hint of corn sweetness and a crisp, refreshing finish. The Blackberry Farm brewing program is guided by East Tennessee’s rich agricultural and culinary heritage.

You’ll find refreshment at our fine dining restaurant near Walland and enjoy a wide selection of refreshing beverages for pairing with Chef Shelley’s inventive and renowned gourmet cuisine creations.

The bar is open to the public Wednesday thru Sunday from 5-9 pm and is the perfect place to relax, unwind and enjoy the company of friends and family. To reserve a table at Dancing Bear Appalachian Bistro, call us at 865.336.2138