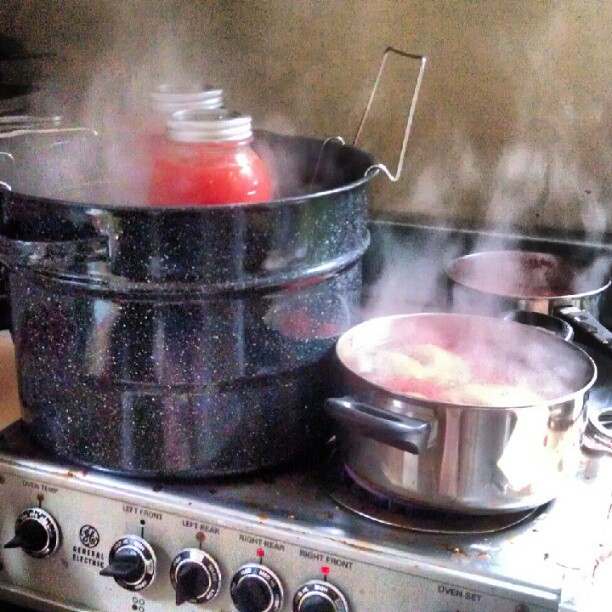 Walk into many groceries, big box stores, and other shops this time of year, and you’ll see more Ball canning jars than ever before. Canning, like many other culinary and craft arts, is seeing a big resurgence. As local and organic food has grown more popular, so have the traditional ways to preserve it.

Appalachia never really let go of its “old canning ways” in a poor region where foraging got dinner on the table as much as farming, it’s important to save every scrap of the summer harvest. This is a land of stew tomatoes, bachelor’s jam covered with a protective layer of hooch, and preserved pig’s feet. Nothing goes to waste.

Autumn in Appalachia is the canning season, the time of putting up every possible piece of produce for winter. These canned and dried goods are where many of Appalachian cuisine’s most unique flavors come from “the strong tang of pickled vegetables, the piquant bite of chowcow, the rich sweetness of fruit butter, the intensity of shuck beans and dried apples. Furthermore putting up is a social time that brings families and communities together to prepare winter’s pantry.

Sidney Saylor Farr wrote in My Appalachia: A Memoir: “A bean stringing was a popular social event in the first part of the 20th century, as were apple peelings, corn shucking, and quilting bees. This was a way for neighbors to socialize even as they got needed work done. Someone might bring a guitar, fiddle, or banjo and provide music. Favorite beans for drying were the mountain white half-runner, the striped cornfield bean, and the Kentucky Wonder.”

It makes a lot of sense that people are taking an interest in the old ways. Like Loretta Lynn said in the preface of her cookbook You’re Cookin It Country, Mothers have the good recipes, and folks don’t make things like they used to, you know. We listen to those Appalachian mothers, but we also turn their advice on its ear. You’ll see flavors like pepper jelly and apple slaw, but also fun twists your great grandmother wouldn’t have had, like pickled shrimp or Vidalia onion gratin or Bison hot dogs with chow chow. We have taken the found dining ways of old school Appalachia and turned them into fine dining, elevating these traditions and acknowledging the art form they really are.

So go on “pick up some canning jars of your own, swing by your local farmer’s market, and start “putting up” for yourself. If ever you lack inspiration or want fresh ideas, stop at dinner and get some ideas for how you can fill your jars, and what you’d like to do with the contents this winter when you open them back up and smell those delicious end-of-summer scents that harken back to tangles of poke weed, fat tomatoes warmed by the sun, berries bursting with tangy juice, and the slow heady burn of basil muddled into bourbon.